People of Muslim faith make up a small but growing portion of the U.S. population—more than 2.7 million people in 2010, estimated to reach almost 3.9 million by 2020 (Pew Research Center, 2015). Almost two-thirds of U.S. Muslims are immigrants.

In general, suicide is viewed by Muslims as taking away the gift of life given by God. The Qur’an says to trust God, have faith in the mercy of God, have patience, and not to destroy life.

Suicide is viewed as an action resulting from psychological illness and severe life stresses. Although the act is not condoned, the person who dies by suicide is not condemned.

People of Muslim faith believe that we are all interdependent. Taking a life unjustly, be it your own someone else’s, is the same as taking the lives of all of humanity. Likewise, saving a life is the equivalent of saving all of humanity.

Below is a listing of some Muslim resources. For other faith-specific resources, check out our resource library.

Nor kill (or destroy) yourselves: for verily Allah hath been to you Most Merciful!
The Qur’an, An-Nisa (The Women) 4:29 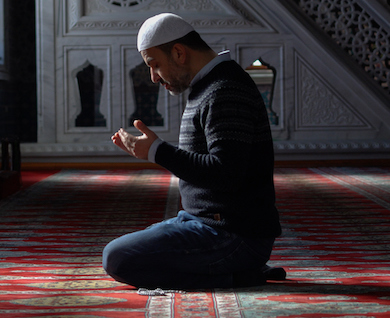