Studies have shown that both news reports and fictional accounts of suicide in movies and television can lead to increases in suicide. In contrast, when depictions are done responsibly, the media can help to encourage help seeking, dispel myths, and reinforce hope – and ultimately save lives.

The National Recommendations for Depicting Suicide include:

Convey that suicide is complex and often caused by a range of factors, rather than by a single event.

Show that help is available.

Portray characters with suicidal thoughts who do not go on to die by suicide.

Portray everyday characters who can be a lifeline.

Avoid showing or describing the details about suicide methods.

Depict the grieving and healing process of people who lose someone to suicide. 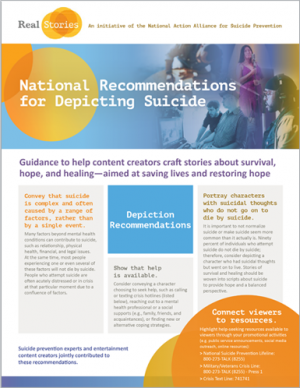